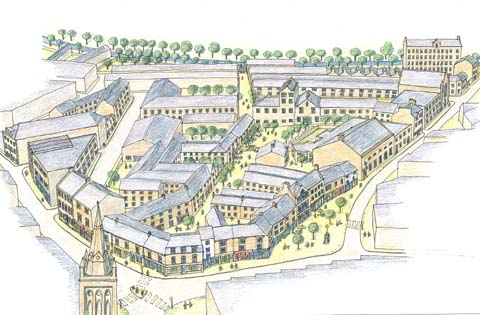 In order to be kept up to date with plans and developments as they happen, as well as our opinion on these, register your details at out contact page

Lancaster Vision generally support the Canal Quarter Regeneration Framework [SRF], however we would make a number of specific points:

Worthington has bought a 2.5-acre plot previously owned by British Land, including the derelict former Mitchell’s brewery, and is now planning to help the council develop a refreshed masterplan for the area.

British Land had been attached to the Canal Quarter since 2012 after buying the site from Centros, but a development agreement between the council and British Land was terminated in April last year, with a council report arguing it had become “inevitable” the developer’s retail-led proposals could not be brought forward, citing legal and funding issues.

Worthington’s landholding covers buildings totalling more than 116,000 sq ft; the remainder of the 16-acre site, which also includes Duke’s, the Grand, and the Musicians’ Co-Op alongside the Lancaster Canal, is owned largely by the council with a smaller number of buildings in other private ownership.

In November, the council put in its own bid for the British Land plot, but the developer accepted the offer from Worthington Properties instead.

The developer will now work alongside the council to bring forward a refreshed masterplan for the rebranded site, with GVA and Planit-IE already on board as consultants.

This revised masterplan is likely to cut back on the amount of retail previously proposed by British Land, and instead will include more business space for SMEs; a wider range of residential accommodation; re-use of historic buildings; an increased city-centre presence for Lancaster University; and an arts hub.

More detailed plans for the site are expected to come forward later this year.

Proposals for the revamp of the Grand Theatre have already come forward, with designs for an extension by architect 3DReid approved earlier this month. This features an additional 4,200 sq ft to the grade two-listed building, along with internal alterations.

Cllr Janice Hanson, Lancaster City Council cabinet member with responsibility for economic development and regeneration, said: “Attracting investors like Worthington Properties, who show commitment to investing in the area and can bring a fresh approach to the regeneration of the city’s Canal Quarter site, is a positive step forward.

“The masterplan for the area is still in its early stages and the council is looking forward to working with the public, businesses and its partners to develop a scheme that reflects the views of the community and realises its key objectives for the site that will achieve significant economic benefits for Lancaster.”

Russell Worthington, development director of Worthington Properties, added: “We’re keen to work with the council and other stakeholders, including Historic England, to help devise the new masterplan that has the best interests of the city at heart, is sympathetic to its history, and will benefit the city for many decades to come.

“We want to support the council’s aspirations to deliver a project that’s ambitious and achievable, allowing many different uses and benefitting all parts of the community.”